With an improved material structure, energy generation can be increased and climate-damaging emissions reduced.

Leipzig –The combined recycling of biowaste through fermentation and composting still has a lot of optimisation potential. The research project FermKomp (FKZ-No: 03KB100) now shows how more biogas can be obtained and climate-damaging gases can be reduced by improving the raw materials.

According to the Federal Statistical Office, the amount of waste collected in biotunnels is increasing every year. Combined with the necessity to convert the energy system to renewables, the trend among operators of recycling plants for organic waste is towards a combination of energy and material use of waste. Biogas is first produced in fermentation plants and valuable fertiliser and compost is obtained in the downstream composting plants. Scientists from the German Biomass Research Centre (DBFZ) and employees of GICON Großmann Ingenieur Consult GmbH and Dr. Reinhold & Kollegen saw great potential for optimisation in these processes and took a closer look at the whole thing. As part of the research programme "Biomass Energy Use" funded by the Federal Ministry of Economics and Energy, they are now demonstrating in the FermKomp project how the structural properties of raw materials could be improved in order to obtain more biogas in the fermentation process and to reduce the climate-damaging gases produced during composting.
The aim of the FermKomp project was to achieve improved degradation in the digestion and composting stages by suitable characterisation and mixing of the substrates and efficient process management. This should increase the energetic efficiency of the fermentation process as well as reduce potential greenhouse gas emissions in the subsequent composting process. 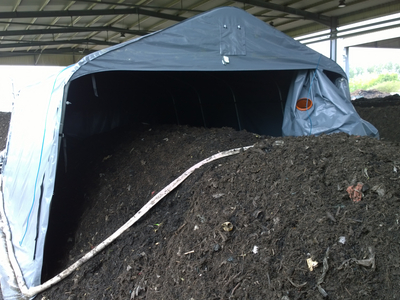