Witzenhausen - The cold season is here and garden lovers and landscapers have plenty to do: raking leaves, mowing lawn and pruning trees are the most important to-do's to prepare gardens, parks and other green areas for the coming winter. A large proportion of the residual material is disposed of in green waste composting plants, where it can be used as fuel to generate energy or as compost for further recycling.

The project Grün-OPTI (FKZ-Nr.: 03KB107) of the Witzenhausen-Institut took a closer look at this topic and addressed the so far insufficient exploitation of the potentials of green waste for a high-quality utilization as fuel and compost. As the presented project results show, the use of residual materials from garden and landscape conservation is still far behind its actual potential. According to a survey by the Witzenhausen Institute, a good 75 percent of the 175 green waste composting plants involved separate woody materials from green waste and use them as fuel instead of feeding them into the composting process. Nevertheless, the proportion of green waste brought in as a fuel fraction is relatively low at 18 percent and could be increased to 30 percent according to calculations by the research institute. 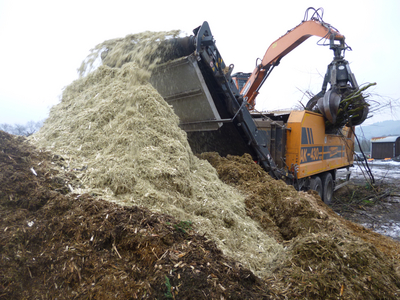