For a flexible power generation of biogas plants and an effective heat utilisation, efficient technologies of heat storage will play a decisive part. For this purpose, an innovative process was developed within the project framework "ThermoFlex". The project was supported by the Federal Ministry of Education and Research (BMBF) as part of the KMU-Innovative-Program. The ThermoFlex process enables the flexibility of biogas plants with a high heat efficiency and without additional heat storage. This allows a significantly reduce of the investment costs compared to conventional heat storage systems. The process based on a controlled operation of a secondary digester in thermophilic temperature ranges after a mesophilic first stage (main digester).
As confirmed by the partners' preliminary work for common process conditions, the process biology of the weakly loaded secondary digesters tolerates corresponding temperature variations.

Based on the promising results achieved in the previous project, a transfer of the ThermoFlex process into large-scale applications is planned. Therefore, a comprehensive R & D work prior the successful market launch is required for further development / adaptation as well as validation / testing of the developed process. This is intended in the follow-up project project ThermoFlex-WAVE. 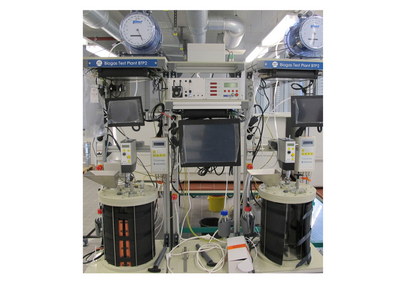